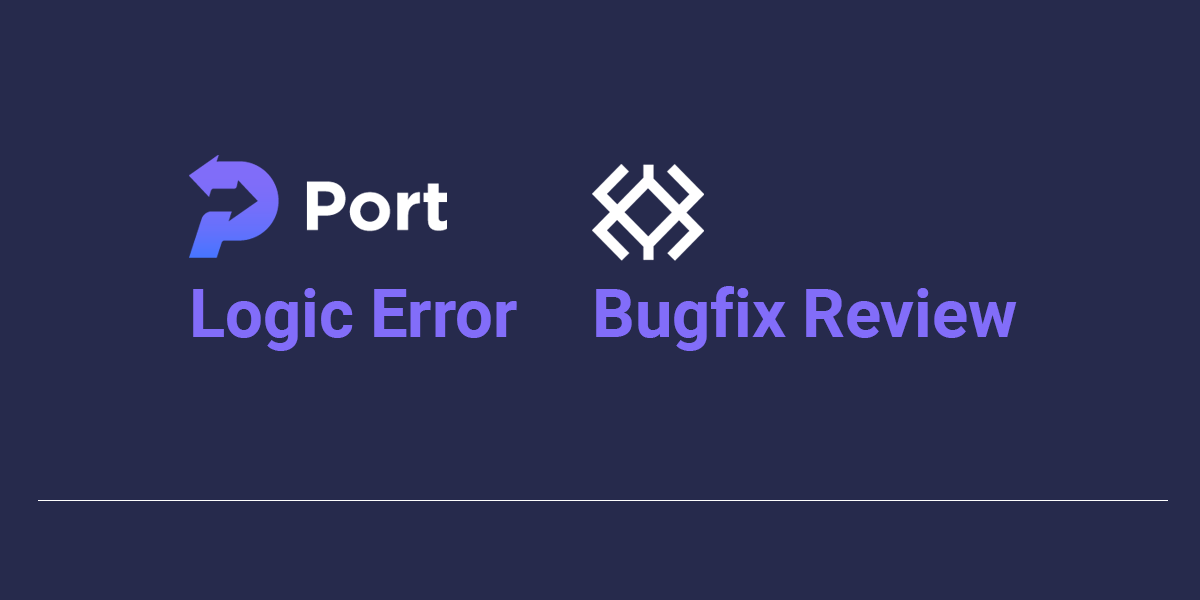 Whitehat nojob reported a critical vulnerability in Port Finance via Immunefi on March 29. If a malicious attacker had exploited the vulnerability, they could have stolen $20-25 million. But because of nojob’s responsible disclosure, no user funds were lost. Port Finance promptly patched the bug and paid the whitehat $180,000 USD and $450,000 in PORT tokens linearly vested over a year. This is the max payout for Port Finance’s bounty program.

Excellent work by nojob for the find and Port Finance for the fix and reward!

Immunefi facilitated this responsible disclosure with their platform. This bugfix review is written by Halborns Piotr, Practice Manager (Solana).

Now, on to an explanation of DeFi lending, Port Finance, and the vulnerability itself.

The capital market in the traditional financial system is not easily accessible to the general public – only the big players have the VIP card to access it.

Suppose you are an investor looking to finance your next business venture. One way of doing it is by taking a loan and offering your assets as collateral. The collateralized capital will essentially be frozen and can grow over time. It can also be redeemed at a later date. This is not a risk-free strategy, though. If you are not careful, you may default on your loan payment and lose your collateral.

Lending protocols in DeFi have now democratized access to debt for everyone. Using your digital assets as collateral, you can borrow from these protocols and leverage upon it. As one of the largest DeFi categories, decentralized lending and borrowing has been growing exponentially since late 2020.

The value of the assets you want to borrow is determined with a parameter called LTV (Loan To Value). Although multiple definitions exist, for the purposes of this example we can define it as a ratio of the value of your loan to the value of your collateral. Currently, most lending protocols offer overcollateralized loans only. For instance, if you borrow $60 worth of some cryptocurrency and you provide $100 as collateral, your LTV is $60/$100 = 0.6.

Liquidation is a safety mechanism which protects lenders from negative price volatility. In a nutshell, if for some reason the value of your collateral is insufficient, the liquidators may purchase your collateral at a discount.

Lending protocols usually set target LTVs for their lending pools, and as a borrower, your main risks involve losing your collateral through mismanagement of your position’s LTV.

Cryptocurrency is known for its extreme price volatility, and if your loan goes below the target LTV, you are at risk of having your collateral liquidated.

This is not an ideal outcome, as you will most likely take a considerable loss and pay a liquidation fee (penalty) on top of that. It is then vital to constantly monitor and maintain a healthy collateral ratio for your loans.

In the DeFi world, the ethos is that shouldn’t be any central entities managing platforms and protocols. Protocol management is often delegated to protocol communities instead. In general, blockchain applications favour the “push over pull” strategy. Rather than doing it in one heavy operation, updating the protocol state is split into several lighter operations that have to be executed in a particular order. This simplifies the application design and incentivizes users to participate in protocol management by rewarding them with tokens or extra perks.

Port Finance’s lending pools (Reserves) are described with a number of parameters, including ReserveConfig:

loan_to_value_ratio determines the target LTV for the pool and liquidation_bonus determines the discount at which liquidators can buy the liquidated collateral.

User positions are described with Obligation structs which store data about all their borrows and collateral deposits.

allowed_borrow_value denotes the maximum total market value of assets the user can borrow and it is calculated as the sum of the value of all user collaterals multiplied by the relevant pools’ LTVs.

Each user deposit is recorded in the user’s Obligation, updating or adding a relevant ObligationCollateral struct. Users can withdraw their collateral, decreasing the allowed_borrow_value and unhealthy_borrow_value.

The maximum market value of collateral that can be withdrawn from an Obligation was calculated with the Obligation::max_withdraw_value.

Before Port Finance had patched the bug, a malicious user could have withdrawn all their obligation collaterals without paying off their full debt under the following assumptions:

– They create an obligation and deposit some token T1 as collateral to reserve R1.

– They borrow token T2 from the reserve with high LTV. The borrow value should be similar to the value of the T1 token deposit.

– They withdraw the entire T2 token deposit. This makes their obligation liquidatable because the T2 token borrow is heavily undercollateralized now.

– They liquidate their obligation. Because the T2 token borrow value is similar to the value of the T1 token deposit and the R1 reserve has high bonus_rate, the **obligation collateral is liquidated at a quicker pace than the borrow is being repaid, and the malicious user drains their T1 token deposit before they pay off their borrow in full**.

The Obligation::max_withdraw_value function was fixed by introducing the withdraw_collateral_ltv parameter denoting the LTV of reserve corresponding to the withdrawn collateral and calculating the maximum withdraw value as the ratio of the delta of the allowed borrow value and the borrowed value, and the reserve LTV.

Halborn announces our $90M Series A